On 18 July 2021, the Pegasus spyware, developed by the Israeli Intelligence agency, NSO Group Technologies, was discovered snooping on the smartphones of journalists and politicians from several countries, including India.

The earliest version of the Pegasus spyware was discovered by researchers at CitizenLabs in 2016 after it unsuccessfully infected the phone of a UAE-based journalist, through spear-phishing messages. Apple was made aware of the attack and soon discovered three zero-day vulnerabilities (CVE-2016-4655, CVE-2016-4656, and CVE-2016-4657) chained to exploit the journalist’s phone.

Over two years (from 2016 to 2018), the spyware had infected more than 50,000 phones in 45 countries, alongside 8 Indian telecommunication companies such as Bharti Airtel Limited, Hathway IP Over Cable Internet, and Mahanagar Telephone Nigam Limited (MTNL).

On 23 August 2021, a new extortion scam was uncovered that leverages the Pegasus iOS spyware attacks to blackmail people into paying a ransom. The scammer threatens to leak sensitive videos of the person to business associates and people on the contacts list apart from dark forums, if a sum of money (0.035 bitcoin, approximately $1600 USD) is not paid within a stipulated time frame.

Five Countries Targeted: At least five countries in the region use NSO Group's Pegasus surveillanceware, which is embroiled in a legal battle with the Israeli government. The disclosure comes after an investigation committee was created in April 2022 to look into alleged violations of E.U law following revelations that the company's Pegasus spyware is being used to snoop on the phones of politicians, diplomats, and members of civil society.

Spanish Prime Minister Targeted: On May 3, 2022, the Spanish officials revealed that the cellphones of the Prime Minister and the Defence Minister were infected in May 2021 with Pegasus spyware that is only available to government agencies in an unauthorized operation.

Apple iMessages vulnerability: The now-patched Apple iMessages vulnerability (CVE-2021-30860), popularly known as the FORCEDENTRY exploit, was not only used by the NSO group, but was also separately weaponized by another Israeli firm called QuaDream on February 07, 2022. QuaDream's spyware, REIGN, was similar to Pegasus in its capabilities and was also used to infect iPhones around the world.

Finnish Ministry Hacked: On February 02, 2022, after an investigation that commenced in September 2021, the Finnish Ministry for Foreign Affairs discovered that the devices of Finnish diplomats abroad had been hacked and infected with NSO's Pegasus spyware. The devices included both Apple and Android phones which were infected without any action on the part of the user.

The news comes in the wake of the spyware being discovered targeting the US Department of State employees in early December. The phones of the employees were all infected with Pegasus spyware using the 'ForcedEntry' iOS exploit.

Saudi Arabia Targeted: On October 25, 2021, a report by Citizens Lab revealed that a New York Times journalist covering events in Saudi Arabia was repeatedly targeted by the Israeli Pegasus spyware over a period of three years, from 2018 to June 2021. The journalist was working on writing a book about the Saudi Crown Prince, Mohammed bin Salman, at the time of the attacks.

New Trojan Campaign: On October 01, 2021, after the recent wave of Pegasus spyware attacks on iPhones, researchers have discovered a new Trojan campaign being deployed by a group unconnected to the NSO. The Trojan masquerades as Amnesty International Organization and promises an antivirus tool, AVPegasus.

Apple patched the Pegasus iMessages vulnerability on September 13. We urge all users to update their iOS versions as soon as possible and not entertain any antivirus solutions that may seem as being offered by a legitimate source.

FORCEDENTRY Patches: On September 13, 2021, Apple released fixes for two zero-day vulnerabilities being exploited in the wild, one of which can be used to install the Pegasus spyware on an iPhone. Tracked as CVE-2021-30860, this zero-click zero-day iMessages vulnerability codenamed FORCEDENTRY, allows attackers to bypass the iOS BlastDoor security feature to deploy the spyware. The other vulnerability, CVE-2021-30858, is a Webkit use-after-free vulnerability that allows attackers to create a maliciously crafted webpage that is executed when visited through an iPhone or iPad. CISA issued an advisory as well. We encourage all users to update their iOS versions immediately.

A New Zero Click Vulnerability: A never-before-seen zero-click iMessages vulnerability was reportedly being used by the Pegasus spyware to attack Bahraini dissidents between June 2020 and February 2021. The new zero-click vulnerability is able to circumvent the Apple BlastDoor feature—a structural improvement to the iOS where it acts as a sandbox for the iMessage app to parse untrusted messages and prevent zero-click exploits. Named FORCEDENTRY because of its ability to bypass the BlastDoor, this vulnerability exists in iOS versions 14.6 and prior. Since it is unlikely that the flaw is patched yet, it might affect the latest iOS versions as well.

What is Vulnerability Chaining?

Vulnerability chaining is a well-established technique used by threat actors during their reconnaissance process, where they identify direct or peripheral vulnerabilities and weaknesses, both in hardware and software, in order to exploit them at the same time to compromise the target host.

The vulnerability chaining technique used by Pegasus in 2016 and 2021 is popularly referred to as Trident. Apple issued an upgrade that patched the security loophole after the 2016 attack, albeit, ineffectively.

Could the Pegasus Spyware attacks have been avoided?

Yes. Apple had issued patches for the security loophole that allowed Pegasus to carry out the phishing attack in 2016. However, Pegasus was still able to use the same Trident vulnerability chaining technique in the recent July 2021 attacks.

In 2019, WhatsApp reported that attackers had used NSO’s Pegasus spyware to send malware to more than 1400 mobiles by exploiting a zero-day bug. The bug allowed attackers to install malicious code without the target ever clicking on the iMessage app or answering a WhatsApp call.

Pegasus spyware takes advantage of how mobile devices and their related features, such as Wi-Fi and mobile data, voice calls, cameras, email and text messaging services, GPS, and passwords, have become integrated with daily life. As a result, Pegasus spyware is highly configurable and can be adapted based on region, language, country of use, and applications installed on the target device.

A Pegasus spyware attack sequence has three distinct stages. Here is a detailed look at the stages:

Once the mobile device has been jailbroken, the attackers install and execute surveillance software that gathers information and helps in persistence attacks. 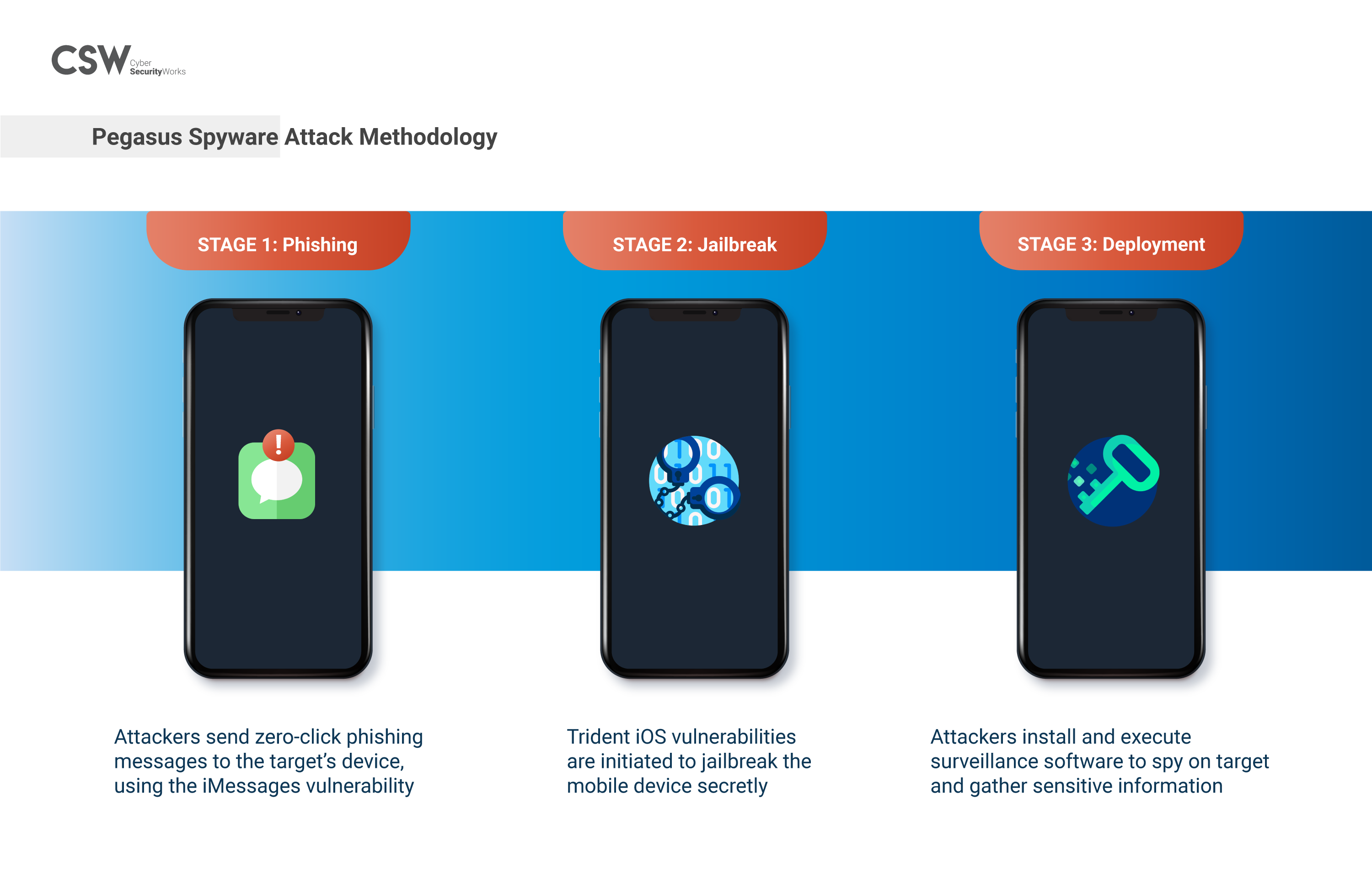 Check for compromise and upgrade your devices.

The NSO Group, the creators of the Pegasus spyware, was hacked on 20 July 2021, and details about their spyware-as-a-service tools were leaked to the public. Researchers at Amnesty then developed a toolkit for iOS versions 7 to 14.6 that could help people identify if their phones had been compromised.

The Mobile Verification Tool (MVT) is a forensic tool to look for signs of infection in a smartphone device. The tool works on iPhones and Android devices, albeit a little differently. iPhone users are at an advantage as they can take a complete backup of their files if any indicators of compromise (IoCs) are discovered on their phones.

Apple released a spyware detector and file transfer tool of their own called iMazing, inspired by the MVT, which makes it easier for iPhone and iPad users to detect traces of the Pegasus spyware. Apple also released a version update, iOS v14.7.1, that seemingly patches the memory corruption vulnerability that the spyware was actively exploiting.

As more people consume information on smartphone devices, the dangers and risks of sophisticated spyware (such as Pegasus) snooping on encrypted information continue to grow. Therefore, organizations and individuals need to equip themselves with the skills necessary to keep their information systems secure and adopt a risk-based approach to boost their security posture.

Unsure if there are any gaps in your security that can lead to a cyber attack?