Conti has been in the news consistently since August 2021, warranting a joint warning from the Cybersecurity Infrastructure Security Agency (CISA), Federal Bureau of Investigation (FBI), and National Security Agency (NSA), bringing to the notice of organizations, the threat posed by the ransomware group and the vulnerabilities it exploits.

A risk-based approach is the requirement of the moment, if organizations want to stay ahead of dangerous sophisticated ransomware groups such as Conti.

Conti Shuts Down: According to threat intel analyst Ido Cohen, Conti’s servers were shut down. Conti ransomware has shut down its last public-facing infrastructure, a pair of Tor servers used to leak data and negotiate with victims, concluding the last chapter of this notorious cybercrime brand.

Intel Management Engine Attack: The Conti ransomware gang has been working on a series of firmware attack tactics that might give a way to access privileged code on compromised machines, according to Conti leaked messages. This includes attacks against embedded microcontrollers, such as the Intel Management Engine (ME), a privileged component included in Intel's CPU chipsets that may totally bypass the operating system.

ContiLeaks: A new Twitter account named ContiLeaks posted links to an archive of Conti's internal chat messages on February 27, shortly after the Ransomware group offered support to Russia in its war against Ukraine. The leaked data also included domains used for compromises with BazarBackdoor, the malware used to access targeted networks. In addition, DHS CISA updated the Conti ransomware advisory with Indicators of Compromise (IoCs) containing over 100 domain names utilized in criminal operations.

The ContiLeaks reveal over 30 vulnerabilities associated with the Conti ransomware, bringing the total to 44 CVEs.

Internal chats leaked from the Conti ransomware group reveal the inner workings of the group, including details on 30 vulnerabilities exploited by the group and affiliates and specific insights into its processes after gaining entry, like how it targets Active Directory.

CSW data researchers and security analysts cover the latest developments, the tools, techniques, and procedures used, as well as the vulnerabilities explored by Conti in 2021-22 in this blog.

Conti ransomware is a ransomware-as-a-service (RaaS) operation believed to be controlled by the Russia-based cybercrime group called Wizard Spider. The ransomware shares some of its code with the infamous Ryuk Ransomware, which went off the news in July 2020.

Conti’s prolific track record continues into 2022, with four attacks being reported within the first two months of the new year. Let us take a look at the different recent incidents involving the Conti group.

In August 2021, a disgruntled Conti affiliate released the threat actor’s ‘playbook’ which listed out the techniques, tactics, and procedures as well as the commonly exploited vulnerabilities.

Here are some tools and command-line utilities routinely used by the Conti gang, and leaked by the disgruntled affiliate:

After the discovery of the critical Log4Shell vulnerability in the Apache framework in December 2021, threat actors, including Conti began exploiting the new vulnerability, as organizations scurried to fix their unpatched systems.

Not long after our researchers observed Conti exploiting the Log4J vulnerability,  VMware vCenter Servers were hacked. Approximately 40 VMware products were found vulnerable to the Log4j bug, and without the proprietary fixes to avoid an attack, Conti was able to use the vulnerability to move laterally through unpatched servers. The attack on VMware led Shutterfly, a photography giant, to be subsumed in a ransomware attack that affected 4000 devices and 120 VMware ESXi servers.

In due course, Conti also became the first ransomware group to have a complete exploit chain for the Log4J Shell vulnerability, thereby raising concerns among cybersecurity professionals worldwide about a spate of supply-chain Conti attacks leveraging the critical Apache bug.

Some interesting trends pertaining to the Conti ransomware group have been observed over the last year. Here is a brief overview of the trends.

As the Russian invasion of Ukraine commenced, the Conti ransomware gang issued a statement to its adversaries in the West, not only pledging allegiance to the war efforts carried out by the Russian government, but also warning of retaliatory attacks on critical infrastructure if any nation were to oppose the war or plan cyberattacks against Russia.

A printscreen of the Conti warning message posted by the gang members.

Shortly after the release of the message, Conti revised it to soften the tone and support for the Russian government. The updated warning mentions that Conti 'does not ally with any governments' and that they 'condemn the ongoing war'.

A printscreen of the revised Conti warning message.

The Conti ransomware syndicate took over the failing TrickBot malware operations in mid-February 2022. Since TrickBot malware is detectable by antivirus vendors, the Conti gang aims to replace it with the stealthier BazarBackdoor malware, which is already in use to compromise high-value targets.

On February 07, 2022, hackers conducting an SEO poisoning campaign were spotted using tools like ATERA agent, BATLOADER malware, Ursnif, and techniques very similar to those executed by the Conti Group. The hackers were attempting to infiltrate organizations through Microsoft Visual Studio 2015, Zoom, and TeamViewer, among others.

Soon after the Ireland Health Service attacks in June 2021, Conti focussed their attention on developing new ways to compromise backup software developed by Veeam that is used for disaster recovery. The Conti gang uses three tools–Cobalt Strike, Atera, and Ngrok–during their infection routines and subsequently impersonate a privileged backup user to grant themselves Veeam backup privileges in order to help them destroy all backups.

The Conti ransomware gang leaked thousands of records stolen from UK-based jewelry store, Graff, during their October 2021 attacks. However, in November 2021, the hackers issued a surprising apology for their decision to leak data that included files on powerful world personalities, like the crown prince of Saudi Arabia.

It has been noted that the threat group ITG23 (TrickBot Gang, Wizard Spider) has been partnering with the threat group TA551 (Shatak) to distribute TrickBot and BazarBackdoor malware which are then used to deploy Conti ransomware on compromised systems.

Shatak APT distributes email-based malware through phishing techniques. Researchers predict that the Conti gang may be using Shatak as an initial access vector.

The Conti ransomware affiliate program seemed to have altered its tactics by offering the organizations who have refused to pay or negotiate a ransom a way to retrieve their encrypted files by selling them access to the stolen data, before putting the confidential files on the victim shaming blogs to be sold.

After law enforcement took down Emotet Botnet in early 2021, the Conti gang seem to have convinced some members of the Botnet team to revive it. Being the most widespread malware, Emotet can wreak havoc as it has done in the past, deploying Ryuk, Conti, ProLock, Egregor, DoppelPaymer, and other ransomware on exposed systems.

We analyzed the CVEs being exploited by the Conti group. Here is our detailed analysis:

Looking at multiple attacks involving Conti ransomware, we have understood the following to be their overall attack vector: 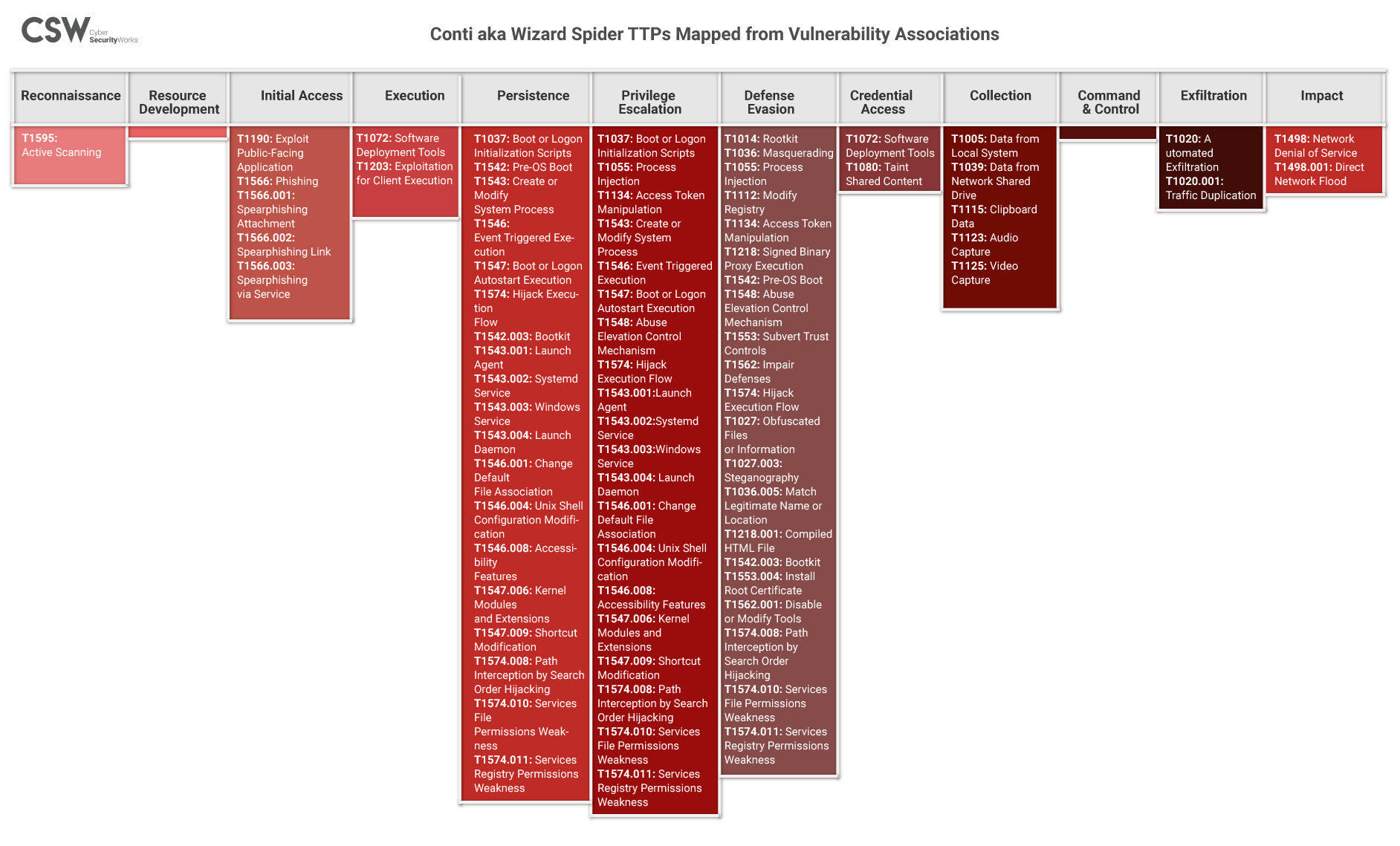 What does the future hold?

Of the seventeen vulnerabilities exploited by Conti ransomware, eleven are part of the Department of Homeland Security CISA’s Known Exploited Vulnerabilities catalog and should be patched immediately.

As highlighted in CSW’s Ransomware Spotlight Report 2022, vulnerabilities that were discovered in 2020 and earlier accounted for 91% of the total vulnerability count (288) as of December 2021. This emphasizes the need for periodic vulnerability management and patching to maintain good cyber hygiene.

Companies ought to seek out more effective approaches towards vulnerability management by adopting vulnerability assessment platforms that can present threat data in real-time, as well as identify, investigate and categorize vulnerabilities based on their weaponization.

Adopting a risk-based approach and prioritizing critical vulnerabilities based on threat context is the need of the hour.

Worried about how susceptible your organization is to a ransomware attack?