All About Vice Society Ransomware

{Update for January 2023}: This January, Vice Society has been going strong with a flurry of attacks across the world, including schools in the UK, emergency fire services in Australia, and a university in Germany.

With a penchant for the susceptible education sector, Vice Society has been making headlines this year by hitting K-12 school districts, apart from healthcare and non-governmental organizations. As stated in an FBI advisory, cybersecurity experts expect it to ramp up its attacks throughout the latter half of 2022 and into 2023.

Being one of the most prolific ransomware groups in 2022, Vice Society ransomware quickly gained the interest of our cybersecurity analysts at CSW who took a deep dive into the secrets behind Vice Society.

It is believed that Vice Society, also tracked as DEV-0832, is a Russian-based group active since December 2020.

Vice Society, unlike other ransomware groups, is essentially a hacking group that first appeared in the news in August 2021 and has been associated with multiple intrusion, exfiltration and extortion attacks ever since.

The threat actors have a history of deploying multiple variants of ransomware, such as Hello Kitty or Five Hands, Zeppelin, and an in-house ransomware also called Vice Society. Since Vice Society and HelloKitty use similar naming extensions and tactics for their encrypted files–.kitty or .crypted–it is believed that there is a link between the two.

Though Vice Society has also been tied to using VMware ESXi vulnerabilities, no CVE associations have been conclusively identified for the threat actor. 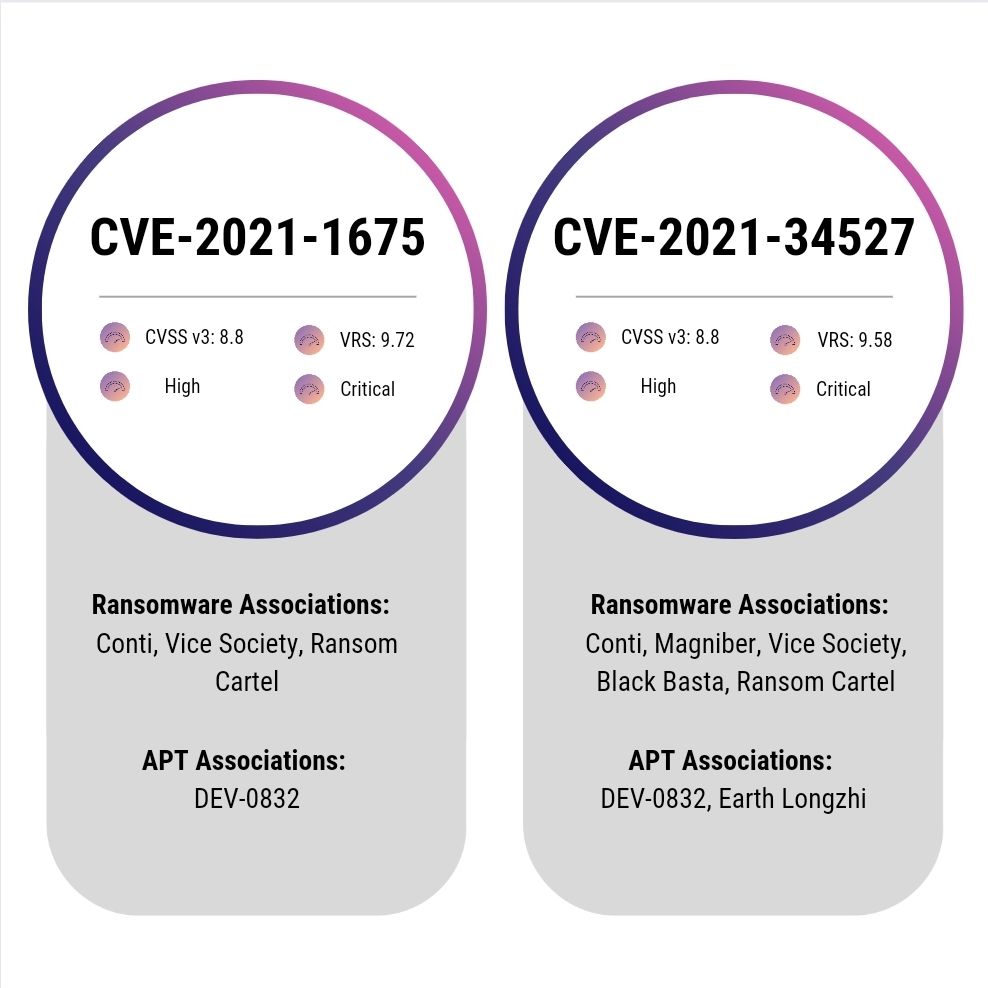 With the help of Securin’s Vulnerability Intelligence platform, CSW experts predicted the likelihood of more attacks leveraging the two PrintNightmare vulnerabilities. Here is a deeper look into how they used predictive analytics to assess the possibilities of future attacks.

This CVE was tagged as extremely critical from the very beginning and also carries the highest predictive score of 38.46 on Securin’s Vulnerability Intelligence platform. The CVE is associated with four ransomware families, namely, Black Basta, Vice Society, Conti, and Magniber.

In contrast to CVE-2021-34527, this CVE did not receive Securin’s highest predictive score of 38.46 till February 2022, after becoming associated with multiple ransomware families such as Magniber, Vice Society and Conti.

Our analysts have been analyzing the PrintNightmare vulnerabilities since the first wild proofs of concept were discovered in June 2021. Here is a graph showing how CSW was able to predict the exploitability of the CVEs much prior to its association with ransomware groups:

The threat group’s most recent victim, the Cincinnati State Technical and Community College, comes in the wake of the attack on the second largest school district in the United States, the Los Angeles Unified School District (LAUSD), in June 2022, which brought the capabilities of the group to the limelight and initiated warnings from FBI, NSA and the Department of Homeland Security CISA.

Other high-profile education sector attacks include the Austrian Medical University of Innsbruck that fell prey to the group in June 2022, affecting IT systems and 3,200 students.

Here is a list of the other attacks carried out by Vice Society:

Here is a short insight into how the encryption functions:

In some attacks, the group has also skipped the ransomware deployment stage, opting for stealing data from the victims and extorting them and threatening to leak the stolen files online.

Common scanners such as Nessus, Qualys and others, were able to spot the PrintNightmare vulnerabilities leveraged by Vice Society ransomware. As a result, patching and ensuring that the organization’s attack surface is secure should be of foremost priority.

How does Vice Society Ransomware Attack? 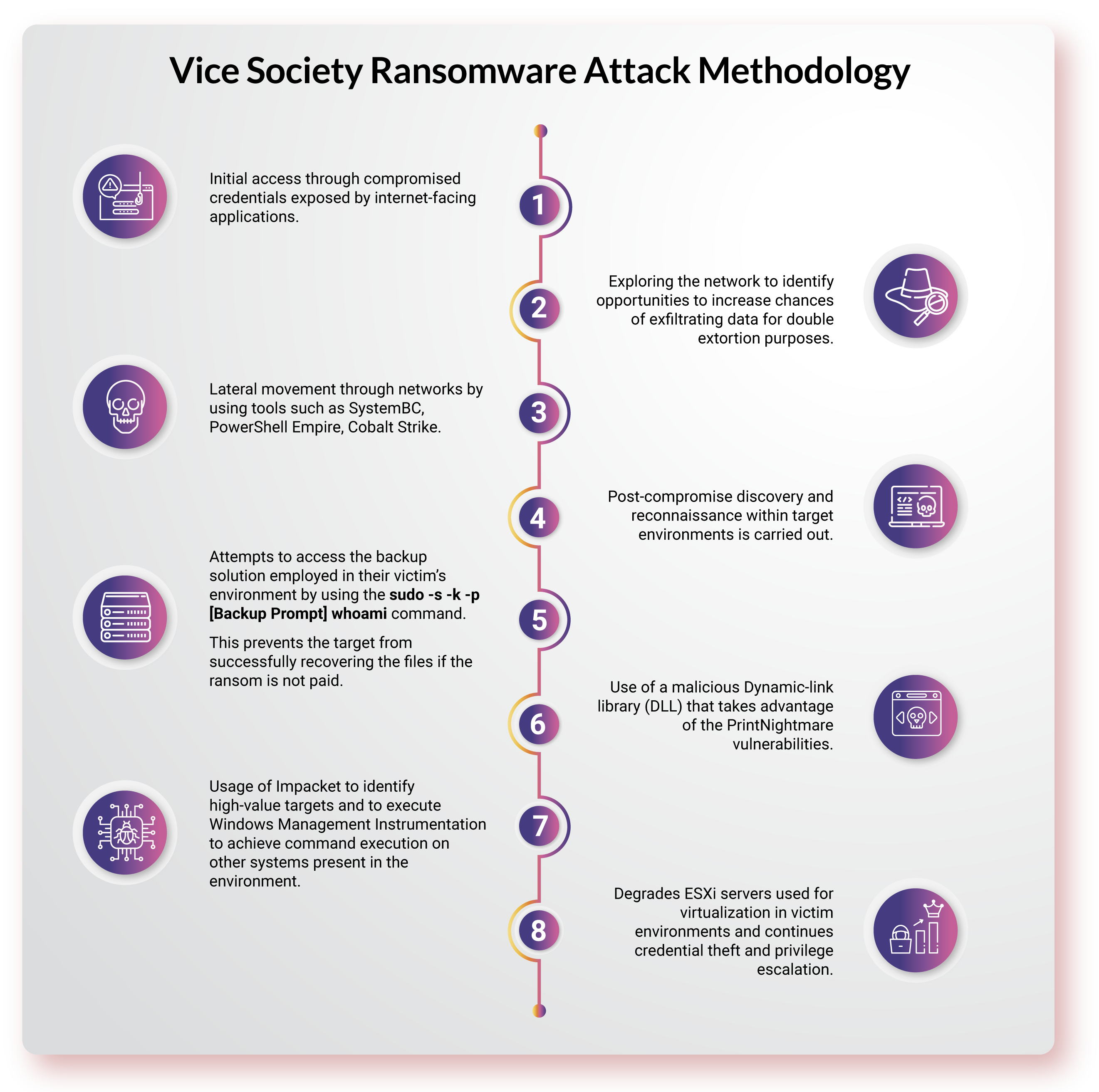 How can Securin Help Protect Your Organization Against Vice Society Ransomware Attacks?

The effect of ransomware attacks on colleges and K-12 schools in the US alone is an estimated $3.56 billion. With so many individuals at risk of data theft, improving cyber security for the future is the solution. Since the data is often unrecoverable, it is important for school districts to stay ahead of the attacker.

Worried about how susceptible your organization is to a ransomware attack?
Get a Ransomware Exposure Assessment done today!