REvil Ransomware uses six vulnerabilities to target their victims and if these had been remediated and patched on priority, JBS - the world’s largest meat packer could have escaped this attack.

CSW warned about these vulnerabilities in its Ransomware Spotlight Report published in February 2021.

On May 30, 2021, JBS, the world’s largest meat producer, fell victim to a REvil Ransomware attack forcing them to shut down their operations, not just in the US, but also in Canada and Australia. This disruption to the food and meat industry halted cattle slaughter and resulted in increased meat prices during the Memorial Day weekend in the US. It also stopped beef production in Canada and Australia and it took around a week for them to restore operations.

Sources indicate that an APT group named Pinchy Spider (from Russia) might be behind this attack.

We know that attackers are going after critical sectors such as food, manufacturing, energy, oil & gas to create maximum disruption and collect millions of dollars as ransom. Colonial Pipeline paid over $5 Million to its attackers to restore gasoline supply. CNA Financial paid a whopping $40 Million - one of the largest ransomware payments till date. The FBI recovered $ 2.3 Million - about half of the ransom paid by Colonial Pipeline - after gaining access to the bitcoin account where the money was deposited. Most recently, JBS paid an $11 Million ransom to the attackers to protect its customers and to resume operations.

Most ransomware gangs like REvil are going after organizations whose supply chain, if affected, can cause widespread panic and chaos.

REvil has so far attacked the Telecom website of Sri Lanka, Fujifilm in Japan, and Sol Oriens, a nuclear weapons subcontractor to the US Department of Energy, just in the month of May 2021, and it will continue to go after critical entities that wouldn’t hesitate to pay the ransom. The latest in the spate of attacks by REvil is a cyberattack on Invenergy, a renewable energy company based in the US, and on Grupo Fleury, the largest medical diagnostics company in Brazil. A $5 Million ransom has been supposedly demanded in the latter.

CSW analysts delved deep into the vulnerabilities they go after and provide actionable insights that would help organizations stay safe from these types of attacks.

REvil ransomware gangs typically target six vulnerabilities and incidentally, all of them featured in CSW’s Ransomware report published in February 2021.

CSW also called out two of these vulnerabilities in 2020 as part of its reports on the Cyber Risk in Virtual Private Networks (VPN) and Remote desktops. 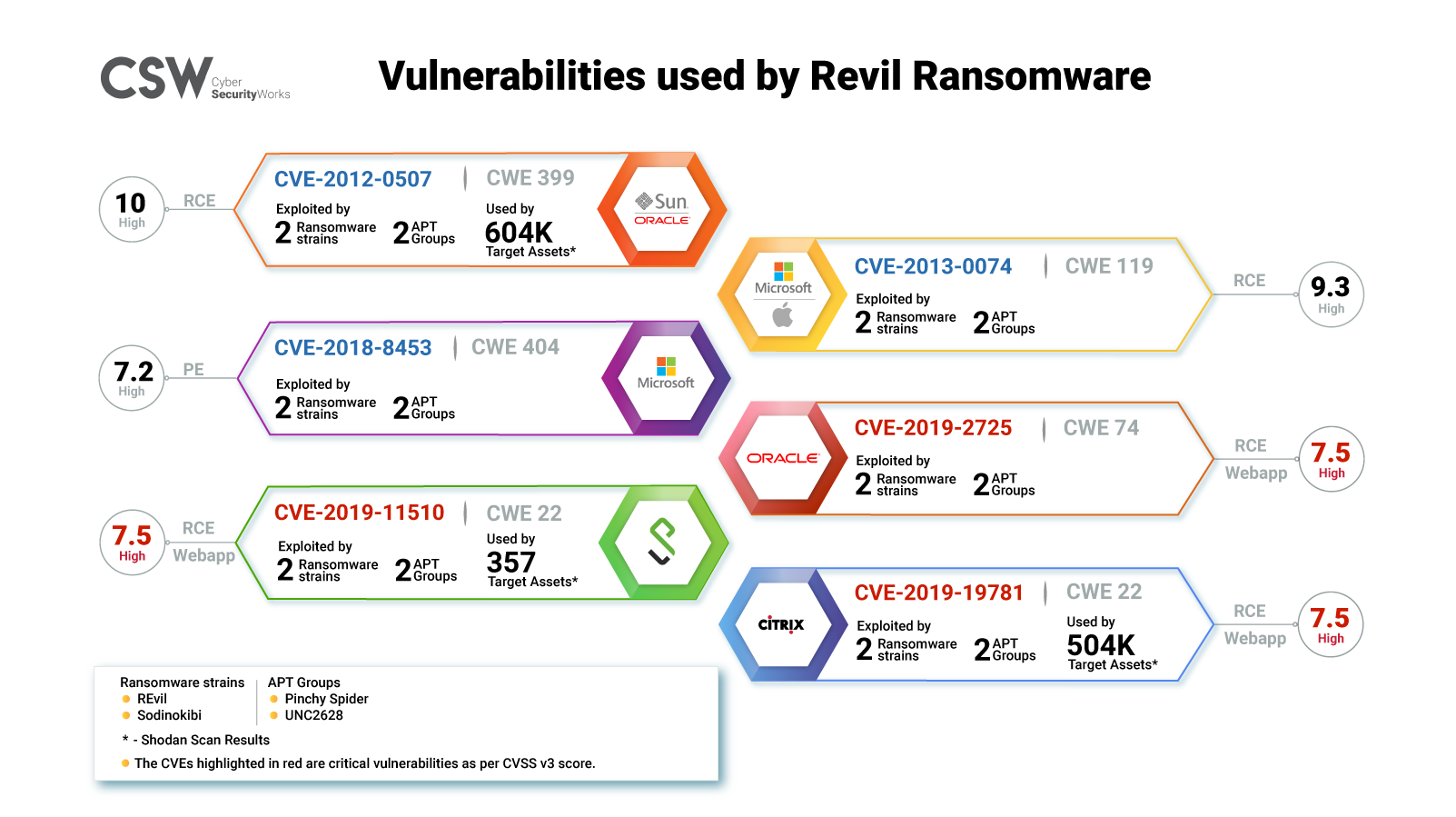 Here are a few quick facts about these vulnerabilities -

An excerpt from Cyber Risk in VPNs published in May 2020

The exposure for CVE-2012-0507 outnumbers the other two CVEs with over 600,000 products with the vulnerability being used around the world.

With Ransomware going after critical sectors and industries, organizations and governments should adopt a risk-based approach to prioritize vulnerabilities based on weaponization and threat associations.